The crew and Moisés García Guzmán on the roof of the church in Tlacochahuaya. PC: Lucia Palmarini 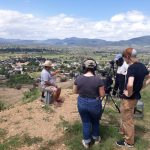 Moisés García Guzmán giving Kathryn, Eddie, and Katie an overview of the town of Tlacochahuaya, seen in the background. PC: Lucia Palmarini 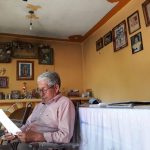 José Ángeles Martínez reading a story in Zapotec and Spanish for us to film. PC: Lucia Palmarini 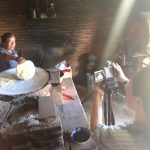 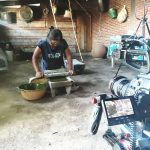 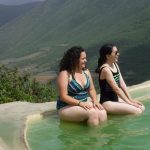 We interviewed Moisés on the big hill (Dany Nagas, as he called it in his variant of Zapotec) overlooking the town of Tlacochahuaya. During the interview, Moi provided an overview of our project and of the town to provide context to those that will be viewing our film who aren’t familiar with Tlacochahuaya, Zapotec, etc. While the crew was in Tlacochahuaya, we revisited the church to observe a new perspective of the town from its roof.

We also had the wonderful opportunity to interview José Ángeles Martínez, dearly known as Maestro Pepe. Maestro Pepe is a Zapotec musician and music teacher who has been a long time family friend of Moi’s. Maestro Pepe gave us his perspective of how he imagines himself as Zapotec through his music and how he used to be a conquist, or a ‘conquest performer’. He thinks the younger generation of dancers don’t understand the gravity of dancing la danza de la pluma, also known as ‘the dance of the feather’ and ‘the conquest dance.’ He explained that there is importance in understanding the aspects of the conqueror, or Spain, in harmony with the aspects of the conquested, or Zapotec and other indigenous people. He also read us a story in Zapotec and Spanish for us to film. Afterward, we interviewed his wife Irma, who sells tejate –a chilled corn based drink– from their home. To end our visit, we all got to try Irma’s refreshing and filling tejate.

Finally, we visited Moisés’ home to film his mom, Angélica Guzmán Martínez, cooking frijoles con hierba de conejo and tortillas while explaining her process to us. Angélica heated corn on a comal, ground it into masa on her metate, and then formed memelas and tortillas to be cooked atop the comal. Hierba de conejo is a wild herb native to Oaxaca and Angélica went through an extensive and intensive process in order to cultivate its growth in the backyard. Adding it in the beans gave them a very distinctly Oaxacan flavor and pairing the beans with the tortillas after they were done was a delicious midday snack for the team. After the shoot, we met with Moisés for a production meeting to solidify planning for more interviews, schedule more shoots, and discuss what our long term goals for the project were.

To end the week, the team visited Mitla and Hierva el Agua, literally “the water boils.” Hierva el Agua is a set of rock formations including petrified waterfalls and swimmable pools of water loaded with minerals. Being able to observe the environmental wonders of Oaxaca has been amazing to have alongside our everyday learning of the people living within.