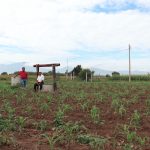 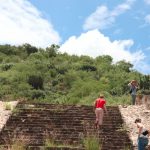 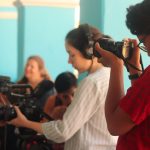 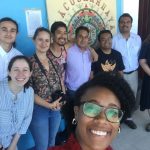 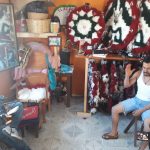 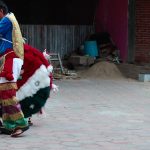 We began shooting this week, and it’s off to a great start. For our first shoot, we drove to Tlacochahuaya to meet Moi and his friend and neighbor, Reimundo, who are both corn farmers. We filmed the pair having a conversation in Zapotec about farming practices, what it means to be Zapotec, and the importance of corn while they sat on a well in Moi’s cornfield (which is called Xayanuez, meaning “under the walnut tree”). We also got some lovely shots of the cornfields and the surrounding mountains in which the valley sits. On our way back, Brook showed us to Dainzú, a Zapotec archaeological site.  Along with the site’s extensive stonework, we saw preserved bas-reliefs of Zapotec glyphs and a Mesoamerican ballgame court. After another day of further planning and media management, the crew drove out again to Tlacochahuaya, this time to speak to the town’s president, Eleazar López Martinez, and the minister of education, Adrian Morales García. They spoke about their own Zapotec identities—Adrian, for example, performs in the danza de la pluma, a Zapotec dance, which is performed on Tlacochahuaya’s holy day in September. The interview reflected the work of Zapotec language activists like Moi. While the officials did not fluently speak Zapotec, Adrian used some Zapotec words, and spoke about the process and importance of teaching Zapotec to young Tlacochahuayans. They have brought in various Zapotec teachers and have incorporated Moi’s Zapotec workshop into the early education curriculum of the town. The following day, we had our final shoot of the week with Pablo Serna in his home-based workshop. Pablo makes headdresses for Zapotec dancers (such as Adrian) both in Tlacochahuaya and other towns. We filmed an interview in Zapotec between Moi and Pablo, and afterwards Pablo demonstrated how he makes the headdress. Pablo also donned the whole outfit of a danza performer and demonstrated the dance in his courtyard.