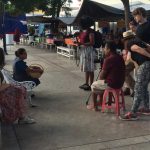 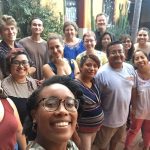 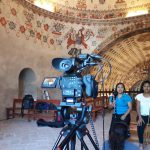 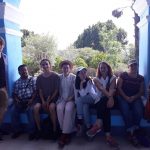 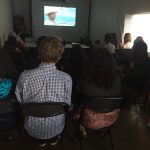 On Monday, the group got a chance  to see and film some of the Guelaguetza in Tlacochahuaya with Moisés. The Gueleguetza is a celebration with the whole community that includes dancers, parades, fireworks speeches, and music. In Tlacochahuaya, it is held in an auditorium on top of the hill

On Thursday, Katie, Edward, Kathryn, Lucia, and Hilary met Moi in the town of Teotitlán to film an interview with artist Gabriela Morales Cruz. Gabriela, originally from Tlacochahuaya, is a visual artist who studied in Mexico City and now does printmaking in her workshop.

Later in the same day, the same crew drove to Tlacochahuaya to interview two musicians that play in the philharmonic band that Maestro Pepe (who Moi had interviewed a few weeks before) directs. They spoke about participating in a tradition that has historically been male-dominated and how playing traditional music helps them to feel closer with their Zapotec identity.

On Friday evening, we were joined by Dr. John Foreman and three of his students from University of Texas Rio Grande Valley, as well as Margarita Martinez, a Zapotec speaker from San Pablo Macuiltianguis. We had a great exchange with this group–we shared our progress on DocuLab, and they shared with us a trilingual (Macuiltianguis Zapotec, Spanish, English) storybook that they had created with beautiful illustrations. Margarita even read one of the stories for us. After, we all hung out and had a cookout dinner at the hotel.

Saturday was a wildly busy editing day, because on Sunday we screened our work-in-progress at the municipal building in Tlacochahuaya. We showed a video about the process of using bulls to plow corn fields that was narrated by Antonio, Moi’s father, and we also showed an introductory video to the project which shows Moi discussing the goals of Dizhsa Nabani, the features of Tlacochahuaya, and his own Zapotec identity, interspersed with clips from all of our shoots thus far. Several interested folks from town attended the screening and some shared their thoughts afterwards. It was awesome to finally see some of our work on a projector screen and to hear from people in the community we hadn’t met.

On to our last week in Oaxaca…!